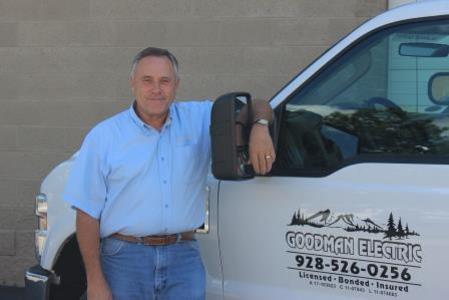 ​Ed was born and raised in Northern Arizona, primarily in the White Mountain Area. He attended Northern Arizona University in the mid 70’s and returned to the White Mountains in 1980 to begin his electrical career. In 1985 he returned to permanently reside in Flagstaff to further his education and to begin working with in the Flagstaff electrical contracting community. Over the past 36+ years of working in the electrical field here in Flagstaff and Northern AZ he has gained valuable exposure, experience, and knowledge in most aspects of the electrical contracting field.

Ed has worked at Goodman Electric for 21 of his 36 years here in Flagstaff. His current responsibilities include commercial/industrial estimating, project coordination and material procurement. He does his best to provide good customer service and strives to bring knowledge, honesty, integrity, and transparency to the Goodman Electric mission of being the Premier Electrical Contractor in Northern AZ.

Ed was one of the founding members of NAECA in 1988 and currently serves as a member of the Apprenticeship Committee. He has provided many years of service to the community through his involvement in his church and the Boy Scouts of America.

Away from the office Ed prefers to be outdoors, whatever that looks like! He loves spending time with his wife, 4 children and 11 grandchildren and participating in their many spectacular adventures and sporting events.